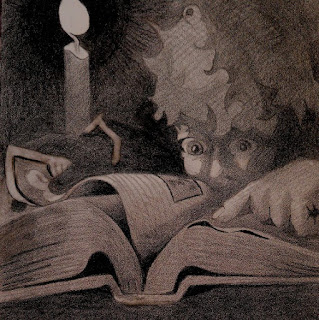 “Do you know what it’s like to have your whole life change in one stinkin’ night?"  She asked me this after she had taken three enormous bite of her “Bird Sandwich.”
I thought back to the night my own father was killed in a fire, started while as a boy, I tried to rescue my mother from that same man’s vile and violent abuse.  Yeah, I thought, one night can fuck it all up or fix it, depending on where you go next.  I had done both.  My mind traveled in time, and in between my next two breaths I became that boy again, in the dark, a step and a breath away from changing everything in his life.

His mom, Alicia, licked at the barrel of the weapon.  It tasted as foul as the man holding it.
She darted her eyes around the room.  She was looking for a way to escape.  She knew it would have to be fast.  Escape would only come after the quickest decision of her life.  She looked toward the door to see if her path was clear.  Alicia saw her son.  He was bathed in the weak yellow light. His eyes were closed tightly, and his mouth was shaping soundless words, a prayer, she hoped.  She could not let Robbie see her son.  That would complicate things way too much.  To her left she saw the can.  It was a simple spray can, filled with furniture polish.  She had dusted earlier in the day.  Robbie had insisted.  She thought she might be able to blind him long enough to allow her to run out.  She looked at Kirby.  His eyes were still closed.  Her husband stood before her, his eyes seemed glazed.  They seemed to reflect light from a source Alicia could not find.  Those glazed eyes would make a nice target.
“You know, Baby, this is as good for me as fuckin’ you any other way.  I think I’ll have me a smoke.  Fuckin’ you was always the best thing about, uh, fuckin’ you!”  He laughed to himself.  It was certainly not a happy laugh.  He pulled a cigarette from out of his breast pocket.  It was so much less menacing in his mouth than the pistol Alicia had to lick.  He reached into the pocket of his black, torn, greasy  jeans, and got his lighter out.  He had just filled it earlier that day.  He fumbled with the lighter for a second, and in the very long second that followed.
Soundlessly, the flame burst from the little silver case.  The fire was too tall and nearly singed Robbie’s eyebrows.  In his surprise, he dropped the gun.  It fell from Alicia’s mouth and dropped to the floor.  She reached for, and got the aerosol can then sprayed.  Robbie never saw it coming.  She had only meant to blind him and run, but there were greater forces at work.  The spray ignited.  A great plume of flame burst forth, enveloping the man’s face.  No tiny feeding spark here, this flame was a rabid animal. Robbie’s hair and skin caught fire.  He started to burn.
Alicia saw Kirby burst into the room at full speed.  He slammed himself into the back of his father.  There was no recognition.  Kirby still had his eyes closed.  He reached for his mother’s hand and pulled her off of the couch and Robbie fell to the floor.  His head smacked on an end table.  Blood spilled from the new cut on his scalp, but it was unseen blood.  Robbie’s head was in full flame.  Kirby, with his eyes still tightly pressed together, pulled his mother from the room, and out into the night.  Robbie pounded his hand to his head, trying to extinguish the flames.  He left eye still worked.  Through that eye and the fire, he saw Big Jim Meaner, his own version of a devil, standing a few steps away.
“Help me?”  Robbie asked.
“No thanks.  We had a deal.”
“You did come for my soul.”
“Nah, you gave that up a long time ago.  You wanted to see fear in the eyes of your wife, and you did.  True, hard fear.  I just wanted to watch you burn, and I am.”
Kirby opened his eyes in time to see the flash of flame light up the inside of his home.  Neighbors were fleeing the building, answering Alicia’s calls and cries.  Kirby stepped away with a disbelieving gaze.  How had this happened?  His father was in there.  Alicia’s cries were clear about that.  No one made any heroic attempts, not even the firemen.  Half of the building burned to the ground.  Robbie had burned with it.  They found little, but enough, a gun, and a story.  Alicia all but accused her son of murder, but the police considered it a rescue.  Kirby had no memory of any of it.  Those memories came much later in his life.  He stepped away a bit further.  His mother was wearing a green vinyl jacket someone had given her.  Her hair and face betrayed a new dementia.  Kirby stepped further away.  If anyone had been closer, they would have heard the soft crack.  Ordinarily, the sound of a spirit being broken is nearly inaudible, but this time, that sound was louder than most.  There were no tears.  There was no hope.  Kirby had been told that he had killed a man that was his father.  He could not deny it.  He had no memory of the act. Alicia had said he came in as crazed as his own father had been.  Kirby had felt the crazed rage, but at this point, Kirby felt nothing.  He was closing doors, and running.
He was in full sprint too.  Gone was the peace he had felt with The Brookside Club.  Kirby now had the peace that only a numbed spirit can give.  Protected, sheltered, immune, but most simply, alone.  Death seemed everywhere.  Death seemed close.   Alone seemed good, even painless.  Kirby stepped even further away from the fire trucks, the lights, the disaster.  He stepped away from himself.  The future had started that night, and Kirby Rounds did not give a good shit about it.  All of the flames were eventually extinguished, and all Kirby had was a single white feather in his hand, and the comfort that it offered.

But that was years ago.  The kind of night that everything changes. Yeah I knew of those things.  I looked at the young woman before me. She sat placidly between bites.  I could almost hear her heart beating, she had a story to tell and I started to wonder how we had come together, here in this spot, as she readied herself to spill her tale.
I looked at Olie and quietly said, “ Tell me, Olie,”
She looked at me.  Tears filled her eyes to the rims, ready to burst, but not quite yet.  She was beautiful.  Her eyes were vivid and sharp.  She had pulled her hair from the pony tail, hair that now framed her features.  She looked softer, more vulnerable that she had on the sidewalk.  She took another bit of a breath, swallowed some Troy City coffee, and finally took a deep breath.  It was time for Olie to tell a part of her tale.  I took a bite of my own bird sandwich, and listened as she let it go.


Parts of the above tayle were first told in the novel Turnstiles by C.R. Boucher