Below that are the dates of her living.  The time she marked along with our hearts.
From the beginning, Momma called her Pickle.  So did everyone else.  Some of us always will. 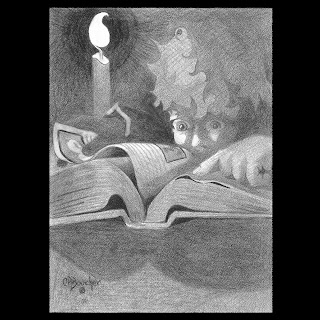 Hydelands a Taylespun Blog
He felt uneasy all of the way here, heartburn, queasy, even just a bit of nausea.  Randy’s stomach was in turmoil, not just too many fucking fried clams for dinner, but too many coincidences.  He should have known better than to eat so much, especially on a work night, but his gastric unease did not matter.  Randy knew exactly what had to be done.  He grabbed at the ax and took his first steps toward the dark green front door.  He hoped it would be better this time, somehow all better.  He would make up to God for misguided choices.  Someday payment would be made in full, and his soul might be cleared of any debt, but for now he had only one thing in mind.  He hoisted the ax to his left shoulder as he had done many times before.

She had come from within a swirling cloud of black smoke, her hair, only a shade or two darker than the midnight sky above their heads, hung nearly to her waist.  Her reddened eyes glared at him with rage.  Some wore terror on their faces while others painted the rage of reason across their features.  This one, wearing a simple white terrycloth robe, slightly tied and hardly covering her secrets, was really pissed.  Randy had no sense of her fear.  Before he took a swipe at the front door, she grabbed at his arm.
“My boy,” she said, her eyes were flames.  “He’s on the third floor, please …” Her eyes, they would stay with him every step of the way.  “Go to him, help him.”
“Tell the man by the truck I’m inside.” Randy swung the ax, crashing it into the door.  One powerful swing and the front door opened.  These tenement houses were never secure, and they burned so fucking fast.  He adjusted his air pack and stepped inside.  Flames were licking along the walls.  Thick black smoke, like angry thunderheads, billowed across the ceiling scorching the white to black.  Randy reached to his headlamp, turning the ineffective beacon on.  To his left, as usual, he found the first set of stairs.  He knew he should have waited for back up, or even a hose team.  But those eyes, he would see them until he died, he was sure, they more than begged, they commanded.
He knew he needed to act fast to get to the boy.  How ironic that it was the same address, 502 Fourth.

“Big Jim will be so proud,” she said peering at the soft light glowing inside the white bag.  Her red eyes shimmered with delight.  “The ones bearing guilt are always the best.  They are forever suspicious, very cautious and most difficult to trap.  This is a really good soul, so much more than just another debt paid,” she said closing the bag.  “That old woman’s wails and curses were not wasted.  Your father will be proud you’ve had such a rewarding night."
They stepped around the red truck pumping water into the triple decker.  Together they walked side by side into the enveloping darkness.